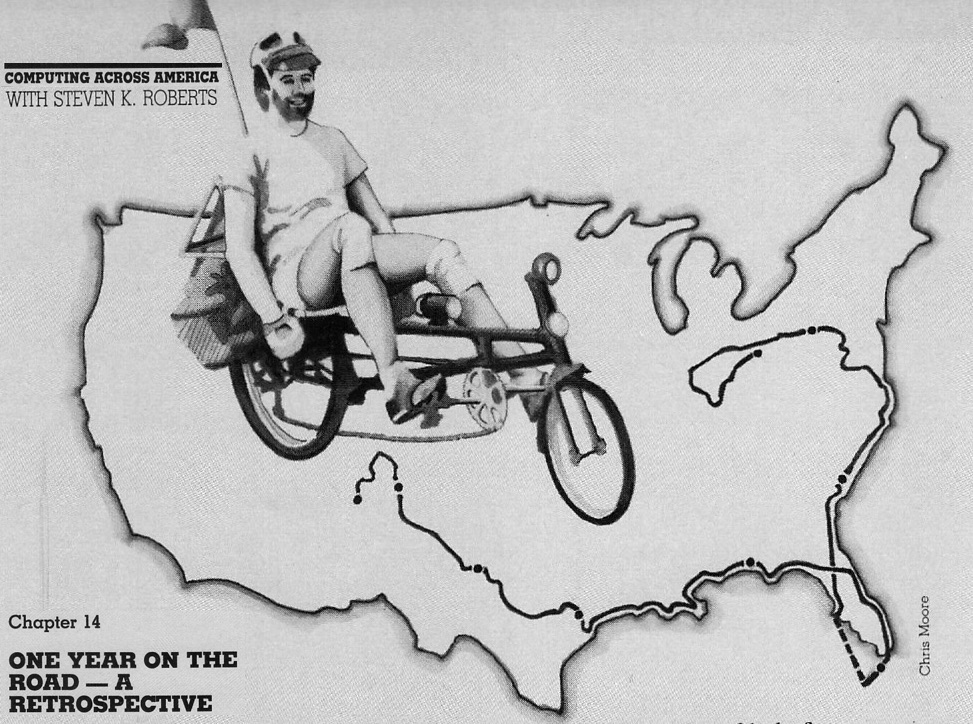 By the end of my first year on the road, my CompuServe “blog” was amassing a huge population of readers… and back in 1984, merely being online was an effective filter. In my mind, my readers were all intelligent, trustworthy, and fun (and for the most part, that was accurate). As a result, the column I was publishing both online (GO CAA) and in print was coming to feel like correspondence with an extended family, with the interesting effect that I was becoming ever more open as time went on. I felt free to express doubts, aches of longing, giggles of naughtiness… because my readers were my peeps, not anonymous distant consumers of some magazine. For the first time in history, there was a bidirectional communication path between author and reader, without the long delays of “letters to the editor.”

This article differed from the rest in that it was about the trip itself… not a travelogue or close-up vignette, but more retrospective musing peppered with a few statistics and touched with speculation about the future. I was in Telluride when I wrote this, and there is a short delicious excerpt from the book that gives an intimate look at what was happening at the one-year mark (with more photos). Life had changed completely since my years in midwest suburbia.

The aspens are changing. Big Bird and his countless offspring appear to have taken over the hills around Telluride, blazing yellow in the high mountain sunshine and startling the eye with every turn. The scene is far too dramatic to be real: massive peaks, dusted with fresh snow, jut from the brilliant yellow-green slopes into a dazzling blue sky, while around me swirls the somehow playful daily life of this scenic Colorado town.

I have been on the road a year.

A year! Has it really been that long since I executed a few unsteady figure-eights for the TV cameras in CompuServe’s parking lot and then pedaled westward with sore knees and a crazy dream? I realize now that the adventure can go on indefinitely. It is no longer just a trip, it’s a lifestyle.

Oh, I will stop someday of course. I’ll fall in love, get sick of living out of panniers or find a town that I just can’t bring myself to leave. It will probably begin as just another routine layover. Then I’ll suddenly realize that I’ve been in the same place for months and that the dusty bike no longer holds quite the same allure.

As haphazard as that sounds, it’s a healthy approach. I met a small group of cyclists a few months ago, cranking out a painful succession of 100-mile days because they “had to be in San Francisco” by August 5. Their memories were filled with white lines on the highway, pain, food stops and campgrounds. They had no time for adventure, no time for love. Their respect for where they were had long since evaporated in the heat of obsession with where they were going.

They were missing the magic.

Well, in the past year, I’ve had a lot of magic. I have also had times of loneliness, fatigue and frustration. The other day, a fellow looked me in the eye and asked, “Come on, all BS aside, why are you doing this?”

“Well, there’s something that has become almost a cliche in the literature,” I replied. “It’s that old question: What would you do if you had only a year left to live? I thought about that for a while, and decided that having 40 years left to live presents exactly the same problem. You have to make every minute count.”

“That’s fine for those who can get away with it,” he said. “And I’m not sure how many would go chasin’ off on a bicycle. But I see your point. I guess I’m just waiting for retirement.” He thought a moment. “I reckon that’s kinda depressing, when you stop to think about it.”

Yep. I’m far too impatient for that.

There have been a lot of changes in this first year. The Radio Shack Model 100 has given way to the much more robust Hewlett-Packard 110, replete with a 3.5-inch disk drive. The Push bicycle computer has given way to the reliable and sexy Cat-Eye Solar. System weight is up to 190, the tent is larger, and the entire load is now streamlined under a custom-made waterproof cover conjured by a magical lady in Santa Fe.

A few numbers. In one year of high-tech nomadics, I have covered 7,355 miles — an average of just over 20 miles per “real day” or 61.5 per “cycling day” (of which there have been 98). No, don’t reach for your calculator — the discrepancy arises from chasing around towns during layovers. The longest single day was 136.4 miles from Aspen to Grand Junction, Colo.; the shortest was 0.1 mile from Orange, Texas to Orange, Texas. (Rain.)

There have been ten flat tires, three of them caused by a product designed to prevent flats. My highest speed was 48.8 mph, with a lot of help from gravity — a force for which I have a profound new respect. The highest altitude I have reached on the bike was 11,361 feet at Slumgullion Pass, and the lowest was 0.

I have ridden in 17 states so far, and spent the longest time — four months — in Florida; friends were starting to accuse me of settling down. The northernmost point was Washington, Pa.; the easternmost was Rodanthe, N.C.; the southernmost was Key West, Fla.; and the westernmost was Grand Junction, Colo. Of all the places I have visited, Colorado’s charming and comfortable Crested Butte most captured my fancy. I could even live there, were it not for the winters.

The most imaginative comment about the bike that I’ve heard in all these miles was spoken in Hammond, La.: “Wow! That looks like something out of a non-violent version of The Road Warrior!“

The most stupid question can be attributed to a tourist in Santa Fe who asked, upon looking at my map of the trip so far, “So tell me, where are you now?”

Perhaps the most perplexing piece of travel advice was offered by a grizzled fellow in east Texas, after I told him I was headed for the Rocky Mountains. “You’re crazy,” he said. “It’s uphill all the way! Oh, you may go downhill sometimes, but even when you do, you’re gaining elevation.”

And so begins the second year of a nomadic existence fueled by a computer technology bordering on the miraculous — along with that fine edge of madness that can make just about anything possible.