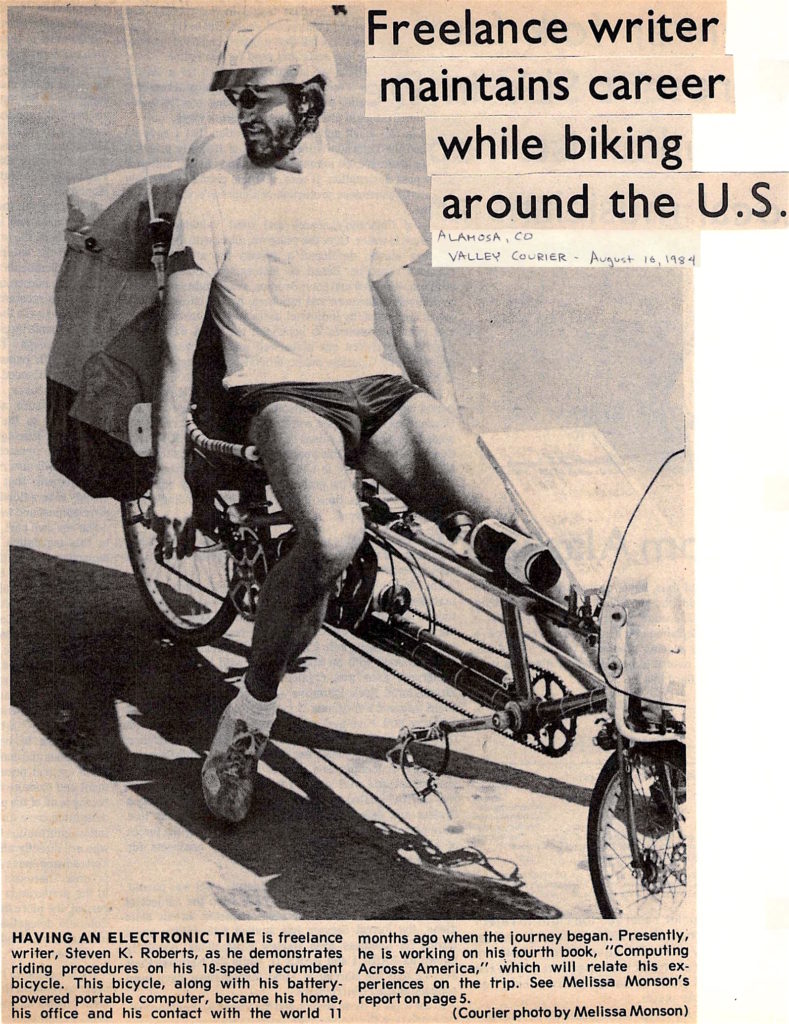 I was heading into the real mountains now, after warming up a bit with New Mexico. Other than a scary guy who harassed me on the road north, I was beginning what came to be known as the “third trimester” of the journey… slowing down to savor the warmth of humans and the rugged beauty of the land, the systems working smoothly, no sense of destination, and a book in progress. Good times.

Photo above: HAVING AN ELECTRONIC TIME is freelance writer, Steven K. Roberts, as he demonstrates riding procedures on his 18-speed recumbent bicycle. This bicycle, along with his battery-powered portable computer, became his home, his office and his contact with the world 11 months ago when the journey began. Presently, he is working on his fourth book, Computing Across America, which will relate his experiences on the trip. (Courier photo by Melissa Monson)

Freelance writer maintains career while biking around US

He is a writer, a biker and a partier. His equipment — clothing, food, an 18-speed, eight-foot-long bicycle, a battery powered Hewlett Packard 110 portable computer and a bit of whiskey — became his home, his office and his social life 11 months ago when he began a bike trip around the United States.

Although Steven K. Roberts, 31, left Columbus, Ohio, last September because he didn’t want a suit-and-tie job, he didn’t give up his profession as a writer. In fact, he now has time to travel and write.

The author of three books, Creative Design With Microcomputers, The Complete Guide to Microsystem Management, and Micromatics, and several magazine articles, Roberts is currently working on his fourth book called Computing Across America.

This chronicles his journey around the U.S. aboard a computer-equipped bicycle. Its publication is currently scheduled in March 1985 by Simon and Schuster Publishing Company of New York.

In addition, Roberts is a columnist for USA Today and all of his work is transmitted electronically through CompuServe to that newspaper or to his office in Columbus, Ohio, where his assistant, Kacy Branstetter receives incoming copy.

CompuServe is a giant computer network based in Columbus and the system can be hooked up through an acoustic coupler which allows his stories to be transmitted over the telephone line.

His assistant manages the office and she is able to handle mail, answer phone calls, edit text, coordinate research and control the flow of money. When Roberts wires a story to her, she cleans it up and ships it to a publisher electronically or produces a hard copy, depending on the publishers’ preference.

In addition, Branstetter sends messages and mail to Roberts in the same manner, thus maintaining a communication system in which all business matters are transacted in any city or town he happens to be at the time.

However, Roberts manages to combine business and pleasure with his portable computer by developing what he calls electronic friendships.

Through CompuServe and a part of the system known as the CB Simulator, new friendships are developed and old ones are maintained, Roberts explained, adding that he has not met many of his computer friends. Each user has a “handle” and they are able to send messages to each other through the computer without ever meeting.

“It’s like meeting at a party and going off for a walk,” he said.

Recently, some users decided to meet each other face to face, so they planned a party last June in Columbus, Ohio, which drew 130 people from 19 states, Roberts writes in a Aug. 2 column for USA Today.

Suddenly, people who had only known Roberts by his handle “Wordy” had a chance to meet him and Roberts, in turn, got to meet many of his electronic friends after months of correspondence.

The bicycle, which Roberts designed, was built by Franklin Frames of Columbus. It has 18 speeds, drum brakes, and under seat steering, he wrote in an article in Popular Computing. Solar panels attached to the front of the bike charge the 12-volt battery that in turn powers his lights, horn, tape, computer and security system.

The eight-and-a-half-pound computer can also operate on its own internal AA batteries when it is not being charged by the battery, Roberts added.

“The battery, radio, alarm and charging circuitry are all located in an aluminum enclosure built into the white handlebar bag on the front of the bike,” he writes in Popular Computing.

If anyone tinkers with the bike’s security system, a beeper will go off, warning Roberts that someone is tampering with it. The beeper is worn by Roberts and it has a three-mile range.

Roberts travels approximately 70 miles a day and he expects to be on the road a year or two. His journey will stop when he meets someone and falls in love, he said laughing.

Although he did not do any physical conditioning before the trip began, Roberts said he is getting in shape as the trip progresses.

The trip is enjoyable, he said, because he gets to meet so many different people. One group he encountered in the Maryland woods, five prison inmates, made him a little nervous. What he thought would end in disaster turned into a delightful experience because he ended up with a bunch of pastries.

The inmates had been sent to clean up a truck wreck and had taken some of the pastries and hidden them in a nearby woods. They led Roberts through the woods to a tarp covering the cupcakes and offered some to him.

Unlike so many individuals, Roberts has managed to combine his love for writing, traveling, meeting people and working with computers — a unique way of life in today’s world.