The first 10,000 miles of my adventure yielded the Computing Across America book, which I am about to re-issue for the Kindle (now that I have this nifty scanner that is creating all these Anarchive entries!). This is one of my favorite reviews…

(2011 NOTE: price and publisher info no longer relevant; the book is out of print, but returning soon as an expanded eBook with a self-published print compilation to follow via Createspace. In the meantime, there are a few used copies on Amazon.)

Many of you will recognize the name “Steve Roberts”—at least enough to say, “Yeah, he’s the guy who rode around the country on a bike with computers and stuff.” He’s been profiled in Time, Popular Science, and a number of other, more specialized journals. But for those of you to whom the name brings up only fuzzy images and almost-recognition, a little background: 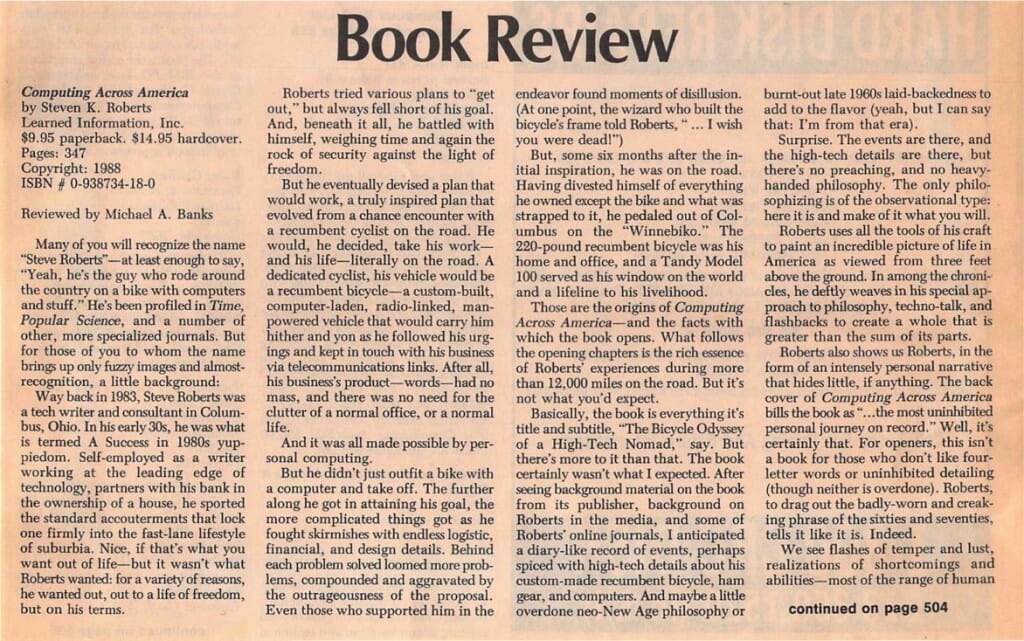 Way back in 1983, Steve Roberts was a tech writer and consultant in Columbus, Ohio. In his early 30s, he was what is termed A Success in 1980s yuppiedom. Self-employed as a writer working at the leading edge of technology, partners with his bank in the ownership of a house, he sported the standard accouterments that lock one firmly into the fast-lane lifestyle of suburbia. Nice, if that’s what you want out of life—but it wasn’t what Roberts wanted: for a variety of reasons, he wanted out, out to a life of freedom, but on his terms.

Roberts tried various plans to “get out,” but always fell short of his goal. And, beneath it all, he battled with himself, weighing time and again the rock of security against the light of freedom.

But he eventually devised a plan that would work, a truly inspired plan that evolved from a chance encounter with a recumbent cyclist on the road. He would, he decided, take his work— and his life—literally on the road. A dedicated cyclist, his vehicle would be a recumbent bicycle—a custom-built, computer-laden, radio-linked, man-powered vehicle that would carry him hither and yon as he followed his urgings and kept in touch with his business via telecommunications links. After all, his business’s product—words—had no mass, and there was no need for the clutter of a normal office, or a normal life.

And it was all made possible by personal computing.

But he didn’t just outfit a bike with a computer and take off. The further along he got in attaining his goal, the more complicated things got as he fought skirmishes with endless logistic, financial, and design details. Behind each problem solved loomed more problems, compounded and aggravated by the outrageousness of the proposal. Even those who supported him in the endeavor found moments of disillusion. (At one point, the wizard who built the bicycle’s frame told Roberts, “… I wish you were dead!”)

But, some six months after the initial inspiration, he was on the road. Having divested himself of everything he owned except the bike and what was strapped to it, he pedaled out of Columbus on the “Winnebiko.” The 220-pound recumbent bicycle was his home and office, and a Tandy Model 100 served as his window on the world and a lifeline to his livelihood.

The Winnebiko in Palatka, Florida, late 1983

Those are the origins of Computing Across America—and the facts with which the book opens. What follows the opening chapters is the rich essence of Roberts’ experiences during more than 12,000 miles on the road. But it’s not what you’d expect.

Basically, the book is everything it’s title and subtitle, “The Bicycle Odyssey of a High-Tech Nomad,” say. But there’s more to it than that. The book certainly wasn’t what I expected. After seeing background material on the book from its publisher, background on Roberts in the media, and some of Roberts’ online journals, I anticipated a diary-like record of events, perhaps spiced with high-tech details about his custom-made recumbent bicycle, ham gear, and computers. And maybe a little overdone neo-New Age philosophy or burnt-out late 1960s laid-backedness to add to the flavor (yeah, but I can say that: I’m from that era).

Surprise. The events are there, and the high-tech details are there, but there’s no preaching, and no heavy-handed philosophy. The only philosophizing is of the observational type: here it is and make of it what you will.

Roberts uses all the tools of his craft to paint an incredible picture of life in America as viewed from three feet above the ground. In among the chronicles, he deftly weaves in his special approach to philosophy, techno-talk, and flashbacks to create a whole that is greater than the sum of its parts.

Roberts also shows us Roberts, in the form of an intensely personal narrative that hides little, if anything. The back cover of Computing Across America bills the book as “…the most uninhibited personal journey on record.” Well, it’s certainly that. For openers, this isn’t a book for those who don’t like four-letter words or uninhibited detailing (though neither is overdone). Roberts, to drag out the badly-worn and creaking phrase of the sixties and seventies, tells it like it is. Indeed. 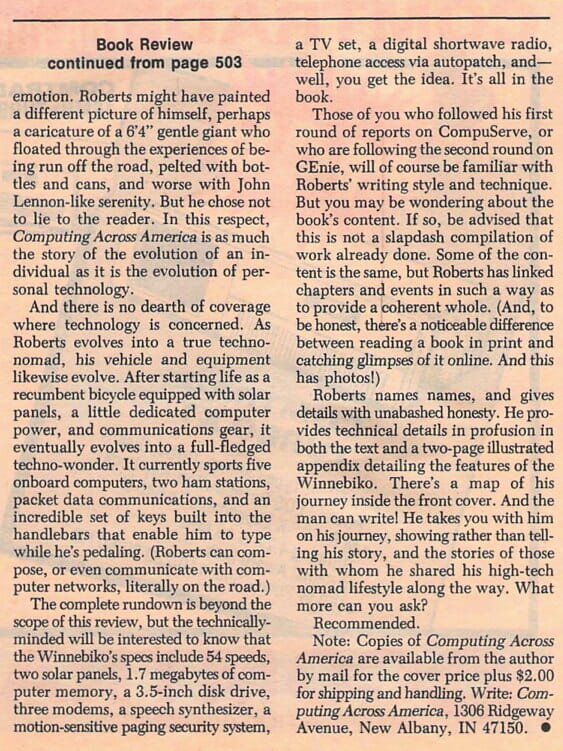 We see flashes of temper and lust, realizations of shortcomings and abilities—most of the range of human emotion. Roberts might have painted a different picture of himself, perhaps a caricature of a 6’4″ gentle giant who floated through the experiences of being run off the road, pelted with bottles and cans, and worse with John Lennon-like serenity. But he chose not to lie to the reader. In this respect, Computing Across America is as much the story of the evolution of an individual as it is the evolution of personal technology.

And there is no dearth of coverage where technology is concerned. As Roberts evolves into a true techno-nomad, his vehicle and equipment likewise evolve. After starting life as a recumbent bicycle equipped with solar panels, a little dedicated computer power, and communications gear, it eventually evolves into a full-fledged techno-wonder. It currently sports five onboard computers, two ham stations, packet data communications, and an incredible set of keys built into the handlebars that enable him to type while he’s pedaling. (Roberts can compose, or even communicate with computer networks, literally on the road.)

The complete rundown is beyond the scope of this review, but the technically-minded will be interested to know that the Winnebiko’s specs include 54 speeds, two solar panels, 1.7 megabytes of computer memory, a 3.5-inch disk drive, three modems, a speech synthesizer, a motion-sensitive paging security system, a TV set, a digital shortwave radio, telephone access via autopatch, and—well, you get the idea. It’s all in the book.

Those of you who followed his first round of reports on CompuServe, or who are following the second round on GEnie, will of course be familiar with Roberts’ writing style and technique. But you may be wondering about the book s content. If so, be advised that this is not a slapdash compilation of work already done. Some of the content is the same, but Roberts has linked chapters and events in such a way as to provide a coherent whole. (And, to be honest, there’s a noticeable difference between reading a book in print and catching glimpses of it online. And this has photos!)

Roberts names names, and gives details with unabashed honesty. He provides technical details in profusion in both the text and a two-page illustrated appendix detailing the features of the Winnebiko. There’s a map of his journey inside the front cover. And the man can write! He takes you with him on his journey, showing rather than telling his story, and the stories of those with whom he shared his high-tech nomad lifestyle along the way. What more can you ask?

The original edition of this book is long out of print, but there are a few used copies on Amazon. I am now working on a new version.