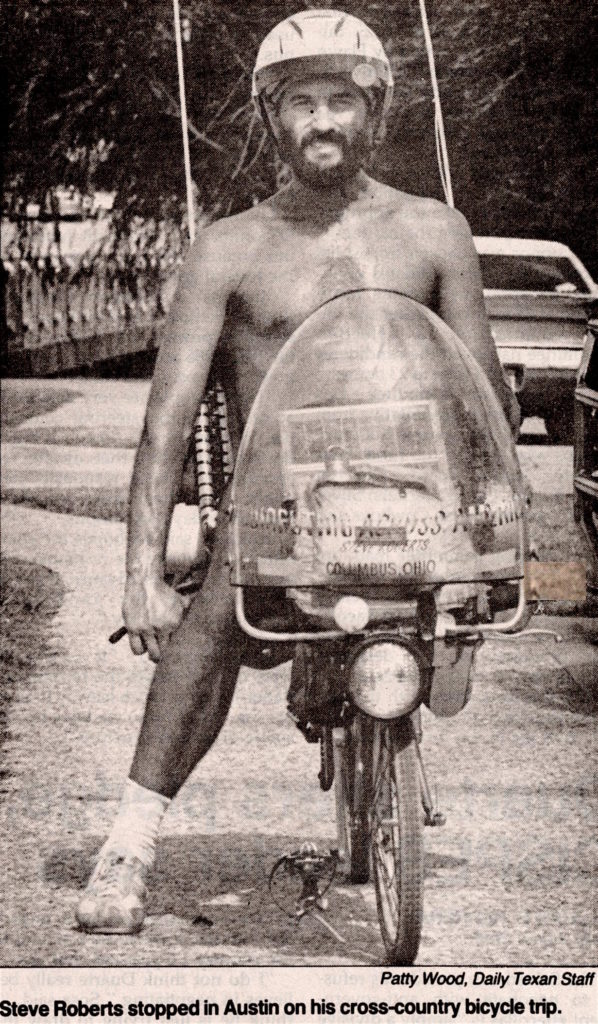 I have always been amused by this photo in my media binder from the first trip… it looks like I lost a leg! Given that I was occasionally asked if the bike is “something medical,” it fits right in. More seriously, it reminds me of the vigor of my youth, being a human engine day after day, a tanned mass of slow-twitch muscle fiber cranking out hundred-mile days. That is a bit hard to imagine now, so photos like this are a treasure. I spent 3 weeks in Austin, and the major piece was in the American-Statesman… but I was also hanging around the UT campus, writing about the co-op scene and cavorting with engineering geeks, so did a quick interview with the university paper.

In September 1983, Steve Roberts left his suburban home in Columbus, Ohio to begin a high-tech bicycle odyssey. For the last eight months, he has been pedaling his way across the nation.

He has travelled 5,300 miles from Ohio to Florida, and now to Austin. His recumbent bicycle, an innovative creation, features greatly improved aerodynamics, handlebars under the seat and a full-backed chair. Roberts plans to travel 14,000 miles in his one-year trip.

A solar panel powers all the electronic gizmos Roberts has packed on the bicycle. One day’s sun provides enough charge to the battery to run such items as a CB radio, a tape deck, headlights, a traffic barricade flasher, a portable computer and a yacht horn.

He arrived in Austin Friday and by chance met up with one of Austin’s only Recumbent bicyclists, Hilmar Strozier, a 1979 University graduate in computer science.

Roberts said he can reach speeds of 44 mph downhill, but only 7-10 mph with a strong headwind.

“You need about 5,000 calories of carbohydrates a day on the road,” Roberts said. The bicycle cost “about six (thousand) for the whole package, everything.”

Roberts’ interests in technology, travel and writing created the opportunity to trek across the country, he said.

“I turned to writing as a license to be a generalist,” Roberts said. “I’m self-taught in both writing and computer studies.”

With frequent hookups to a computer network via telephone, Roberts can store stories in the computer’s memory and send them to magazines around the country. He types his work on a portable computer and sends the final edited copy to the computer to store in its banks or distribute to other parts of the country.

“I couldn’t maintain a full-time business on the road without the high tech,” Roberts said. “That keeps me from having to worry about money.

“If you have to worry about where you’re going you lose sight of where you are,” he said.

Roberts may work hard on the road, but many see him as a travelling bum who must be unsuccessful, he said.

In Key West, Fla., tourists would give him a dollar after describing the many features of his bicycle, he said.

One Austin resident shouted “Get a job and buy a car…” as he passed by, Roberts said. “If I had a chance, I would have told him I have both. I let my secretary use the car.”

In Virginia, he ran into a band of prison inmates working by the side of the road, he said.

“I stopped and chatted with them,” Roberts said. “One of them asked, ‘Do you have a gun on that thing (the bicycle) there, man?’

“He was about to leave when “this redhead said, ‘wait I got to fix you up.’ ” Leaving his bicycle behind, he followed them through the woods, he said.

He said he came to a clearing where a tarp covered a huge mound. One of the convicts pulled back the cover, he said. “There was a giant pile of Sara Lee cakes,” Roberts said. “One of them said, ‘You want the Walnut cake. It’s great. Here take some of these.’ ” Another disagreed, he said. ‘Take the Cheese Danish. Yeah, the Cheese Danish.

“All these convicts were arguing about which type of Sara Lee cake was best,” Roberts said. “I walked off packed with cakes, festooned like an ad for Sara Lee.”

In Christainsburg, Ohio, 60 miles into his journey, Roberts pulled up to a local pay phone to type in a story, he said.

“This dusty old pickup pulled up behind me, and this dustier old farmer came out,” Roberts said. “He squinted at me, looked at my bicycle and at me typing into my computer, and asked, ‘Are you with NASA?'”

“It’s fun to be an agent of future shock,” Roberts said.

In Miami Beach, Fla., Roberts was approached by two science teachers. He said one pointed at the solar panel on his bicycle and asked, “Is this a solar heater or a tool kit?” The other asked “Now is this something medical?”

“I’m sure she’s telling her science classes all about the paraplegic on the weird bicycle,” he said.

“I was in Key West long enough to hear the tourist bus point me out and give a little description of me,” he said.